Where We Lie on the Face of the Earth

From a national perspective, when places such as Chesapeake Bay or the Florida Everglades are mentioned, certain images are conjured in the mind of what these places are like. Some may consider these places to be beautiful, some mysterious, and others may see them as controversial because of the environmental, social, and cultural problems that they face. However, all would know them as national treasures.

Now mention Louisiana’s Barataria and Terrebonne basins, and most assuredly, the images would not reflect the distinctive character or cultural diversity, and ecological importance of one of America’s best-kept secrets. 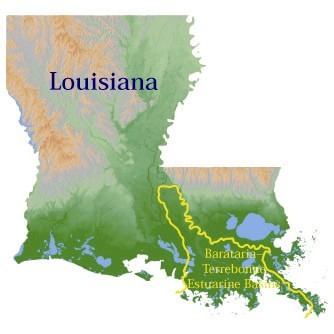 While people from south Louisiana are of a unique culture, a mixture of peoples from all over the world, they too may not know of the importance of Barataria–Terrebonne’s natural places. Not only is it one of America’s best kept secrets; it is nearly without rival from an ecological and economic perspective – surely a national treasure.

The Barataria–Terrebonne basins lie in south central Louisiana and are essentially bounded by two great river systems, the Mississippi and the Atchafalaya. Both basins are considered part of the Mississippi River Deltaic Plain that has been historically built and nourished as part of the natural deltaic process of the meandering of the Mississippi River for thousands of years. Barataria–Terrebonne encompasses an area of over four million acres of marshes and swamp, farms and timberlands, and bays and bayous that are rich almost beyond imagination in natural resources.

Geographic position, or where we lie on the face of the earth, may be more significant than the variety and productive nature of our habitats in explaining the popularity of this region. Many birds that frequent southeast Louisiana are considered Nearctic Neotropical migrants spending part of their life in Barataria-Terrebonne. The location of this region along the central gulf coast provides a “jumping off point” for many migrants crossing the gulf on their way south during winter migration and “returning point” for those coming back in the spring. Additionally, temperate migrants in search of milder winter climates forage in Barataria-Terrebonne’s rich productive habitats during the colder months. 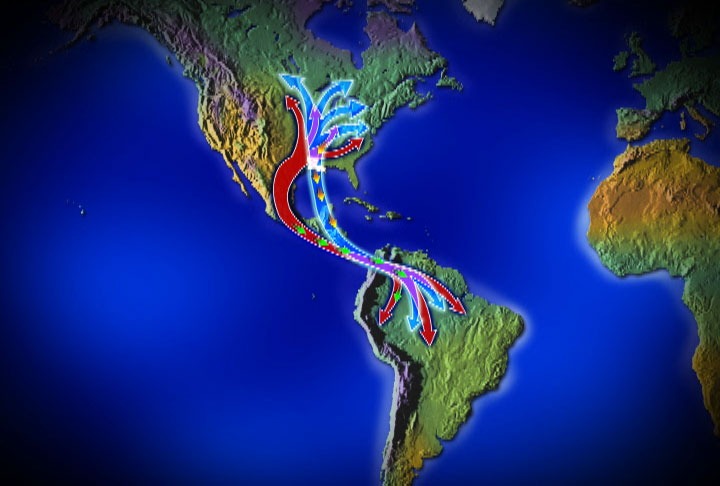 The arrows represent in general the path followed by many Nearctic Neotropical migratory birds during their spring and fall migrations. In fact, migratory birds on their way back from Central and South America in the spring cross the Gulf of Mexico landing anywhere from east Texas to Florida. The same is true for fall migration as well. There is no one place where all birds flock before they begin their journey south across the Gulf of Mexico. Many places along the gulf coast serve as “jumping off points”.
BTNEP Birds Menu