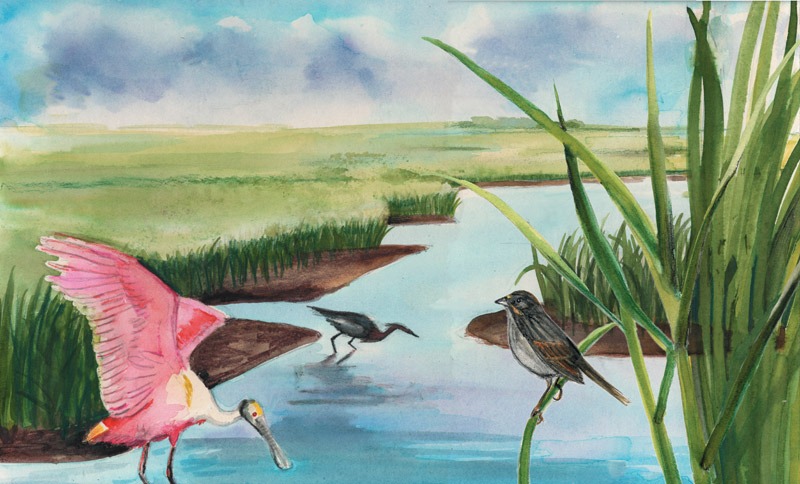 There are many places in southeast Louisiana where vast freshwater, intermediate, brackish, and saltwater marshes stretch as far as one can see. These seemingly endless lush green fields with their intermittent ponds, lakes, and bays are important habitat for millions of birds. Because the slope of the Mississippi deltaic plain from north to south is so gentle, changes in marsh communities are gradual and the boundaries often difficult to discern. Typically, these marsh communities parallel the coast and are distinguished from one another by the plant species that make up these floral (plant) communities.

Much of Barataria-Terrebonne’s freshwater marsh is “floatant” meaning that it is buoyant during certain times of the year. Also known colloquially as “trembling prairies,” these marshes break away from the sinking land and float during periods when water levels are elevated. Rare across the United States, some floating marshes are so buoyant that they quake when walked on while others or so firm that it is difficult to tell that they are floating. Firm floating marshes can be classified as evergreen shrub/scrub habitat because of the thick stands of wax myrtle that colonize them. 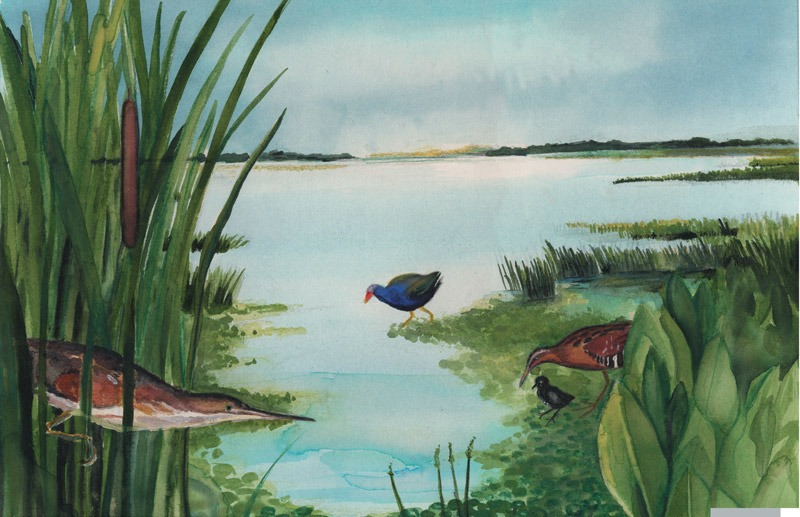 Many of these non-fresh marsh habitats are rooted to the ground and are not buoyant meaning that they are inundated during high tides. Plants that are common to these marsh habitats have evolved to tolerate limited saltwater and flooding for short periods.

Migratory songbirds that spend part of their journey in marsh habitats include northern waterthrush, yellow warblers, common yellow-throats, and indigo buntings. These birds can typically be found in the floating marsh habitats that support shrub species of plants. Resident marsh birds that nest and make their home here include mottled ducks, common moorhens, glossy and white-faced ibis, and marsh wrens. Common loons, horned grebes, lesser scaup, and red-breasted mergansers are usually found on the open lakes and bays that fringe many of these marsh habitats.

Distribution of many species of birds is influenced by salinity, with species such as clapper rails and seaside sparrows restricted to salt marsh, while least bitterns, king rails, and purple gallinules are found in fresher marshes. Some species tolerate a wide range of salinities and can be found throughout all marsh habitats including red-winged, blackbirds, great blue herons, and white ibis.